Queen Elizabeth mourned her husband with dignity and stoicism during a funeral service that bore Philip’s touch and celebrated his life and legacy.

After almost 70 years as head of state, the Queen will reign without Philip by her side – a man she met as a young girl and who was the bedrock of her happiness. In a symbolic moment, the Queen was pictured sat alone in St George’s Chapel at Windsor Castle as she waited for the funeral procession carrying her late husband’s coffin to arrive.

But Philip’s death at the age of 99 has revealed a side of the monarchy rarely seen beyond palace walls – a picture of a close-knit family who holiday together, share the good times and the bad, with Philip and the Queen at its heart.

The outpouring of tributes and pictures from the royal family shows how beneath the public perception of an irascible figure, the duke was, as the Dean of Windsor summed up during the service, a man of “kindness, humour and humanity”.

The day was one of contrasts, a spectacle of pomp and pageantry provided by the many regiments and military units – associated with Philip during his lifetime support of the armed forces – who took part.

And there were also simple touches that reflected the man – his carriage, used for racing around courses, was parked so that it was passed by the funeral procession. 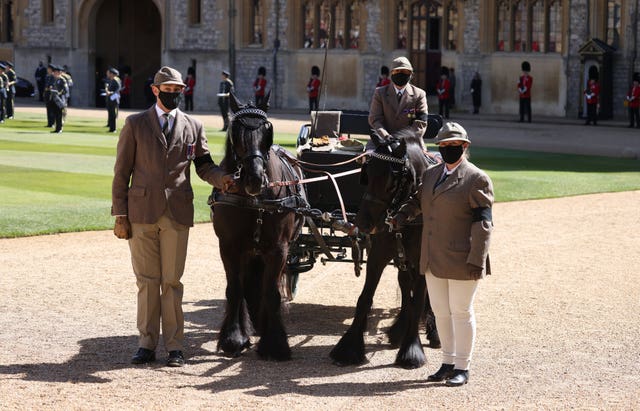 On the seat were the Prince Philip’s cap, whip and brown gloves, and nearby a red pot containing sugar lumps the duke would give to his ponies.

His coffin, draped with his personal standard, featured his Admiral of the Fleet naval cap and sword next to a wreath of white flowers chosen by the Queen with a handwritten card, edged in black, from his wife of 73 years.

In bright brilliant sunshine, the funeral procession made its way through the precincts of the castle.

Philip’s children walked behind his coffin, which was carried by a Land Rover Defender hearse he helped design. 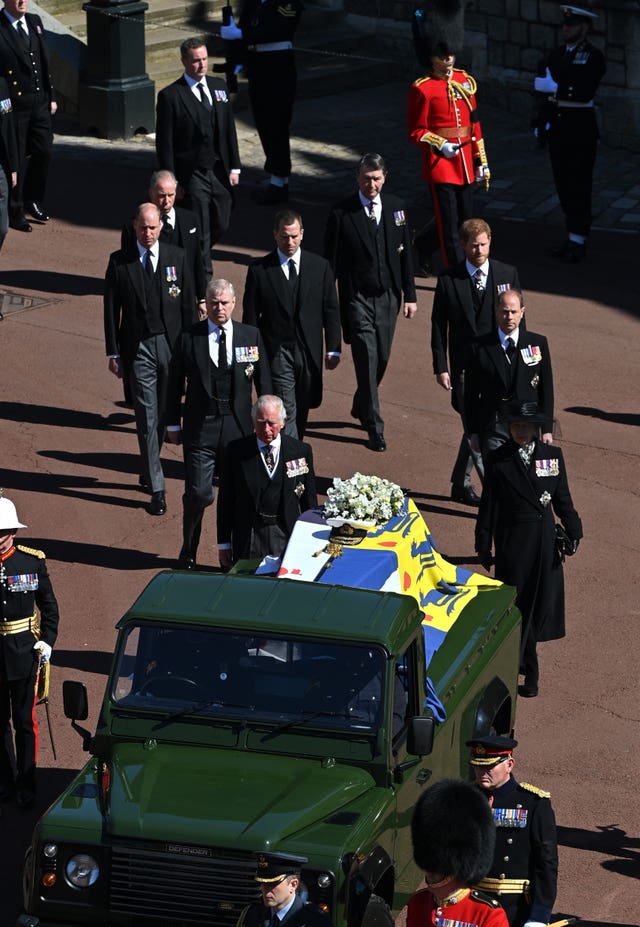 The Duke of Edinburgh’s coffin, covered with his personal standard, is carried on the purpose-built Land Rover Defender outside St George’s Chapel (Justin Tallis/PA)

They were joined by the duke’s grandsons the Prince Harry, Prince William and Peter Phillips, and Vice Admiral Tim Lawrence and the Queen’s nephew the Earl of Snowdon.

The royals walked in step as a military band played and all stared straight ahead into the sun as they made their way to the duke’s final resting place.

Harry and William – who have a troubled relationship – were separated by their cousin Peter Phillips but he dropped back half a pace at one point so the brothers appeared closer together. 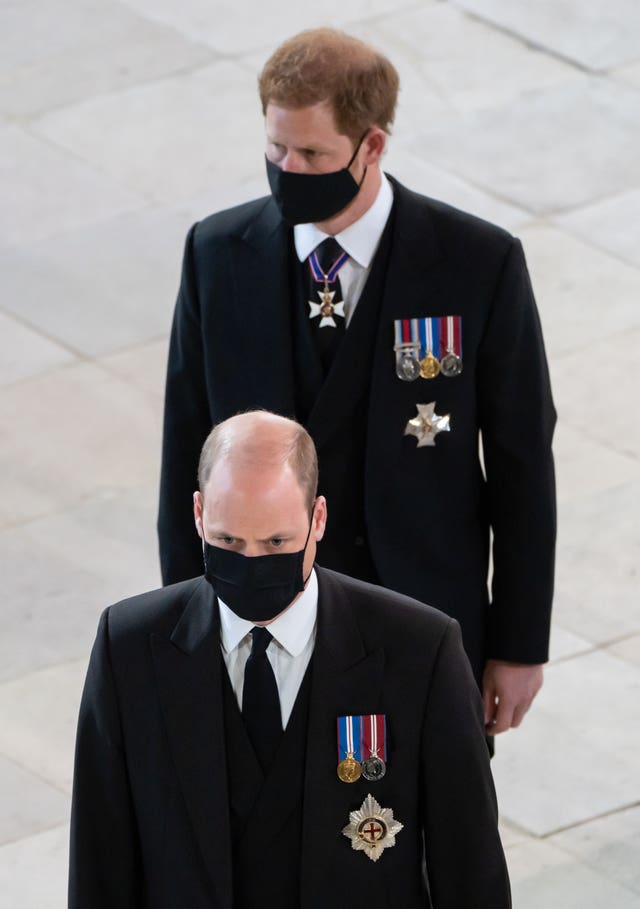 The Duke of Cambridge, followed by the Duke of Sussex, entering St George’s Chapel for the funeral of the Duke of Edinburgh (Danny Lawson/PA)

After the service, the siblings walked back up the hill to the castle deep in conversation and seemed to have put any differences aside. Covid restrictions meant all 30 mourners in the chapel wore face masks and were sat socially distanced with partners or by themselves.

The Queen’s nearest family member was her son Andrew, while across from the monarch were Charles and Camilla seated together.

There was a space left beside the Queen where her husband the duke would have sat. 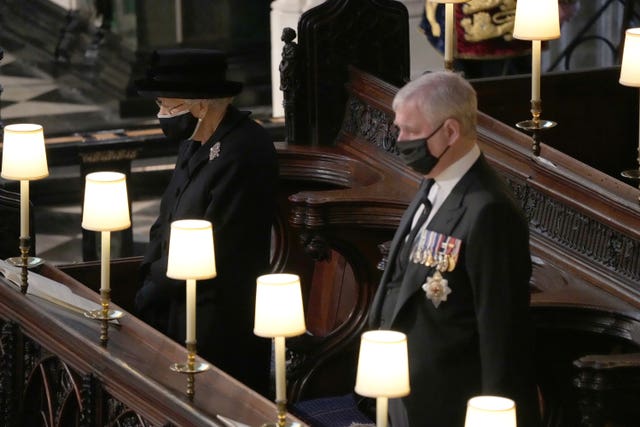 Zara and Mike Tindall, Princess Beatrice and her husband Edoardo Mapelli Mozzi, and Princess Eugenie and her husband Jack Brooksbank were also among the mourners. Three of Philip’s German relatives were invited, as was his close friend Countess Mountbatten of Burma.

Philip was the guiding force behind the preparations for his funeral, which was pared back because of Covid restrictions, with guests reduced from around 800 to 30 and the public elements cancelled.

The well-known Victorian hymn Eternal Father, Strong To Save was sung by a choir of just four due to Covid regulations. 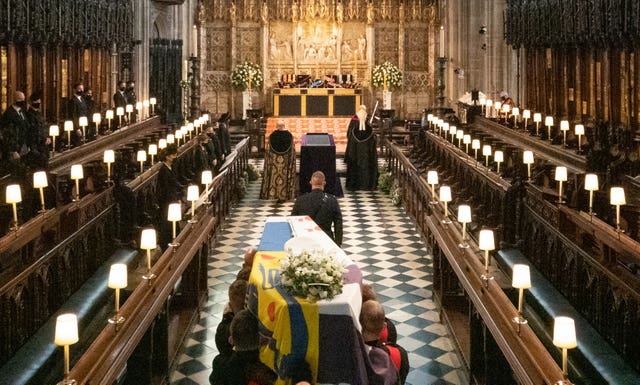 It is strongly associated with the Navy in the UK but is also popular with the naval traditions of countries such as the US and France.

Philip had a close connection with the Navy for more than 80 years, having enrolled at Britannia Royal Naval College in Dartmouth aged 17, served at sea during the Second World War and later held numerous honorary ranks.

In a prayer, the Archbishop of Canterbury gave thanks for the duke’s “resolute faith and loyalty”.

The Most Rev Justin Welby said: “O eternal God, before whose face the generations rise and pass away, thyself unchanged, abiding, we bless thy holy name for all who have completed their earthly course in thy faith and following, and are now at rest; we remember before thee this day Philip, Duke of Edinburgh, rendering thanks unto thee – for his resolute faith and loyalty, for his high sense of duty and integrity, for his life of service to the nation and Commonwealth, and for the courage and inspiration of his leadership.”

At the end of the service, Prince Philip’s coffin was also slowly lowered into the royal vault as his titles were read out.

A mournful lament was played by a Pipe Major from the Royal Regiment of Scotland, and as he walked away from the chapel the music faded until he finally stopped.

In the nearby nave, the Last Post was sounded by buglers from the Royal Marines and a few moments later the Reveille was played by the State Trumpeters of the Household Cavalry.

Philip served as Captain-General of the UK’s Royal Marines for more than six decades and at the end of the service the buglers sounded Action Stations.

The short piece, picked by the duke, was a fitting finale and is played on a warship to signal all hands should go to battle stations and is sometimes featured at funerals of naval men.

As the royal family followed the Queen out of the chapel, Harry glanced down at the opening to the royal vault.

He recently spoke about holding video call chats with his grandparents and joked how Philip would not bother clicking a button to end conversations – but would slam the laptop shut.

‘What if it’s my last Christmas?’ Vicky Phelan delayed US cancer trial to spend time with family